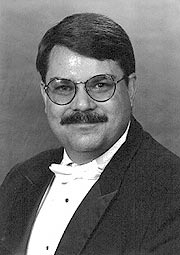 was the GSBBB's conductor, as well as the instrumental music director at Lakewood High School in Lakewood, California at the time of his death in 2007.

He was formerly on the faculty at the University of Southern California where he was associate director of the USC Trojan Marching Band and conductor of the USC Brass Band. Previously, he served on the faculty of Ithaca College in New York where he was assistant professor of music education and conductor of the concert band and brass choir. His background also included teaching instrumental music in public schools in Colorado.

He was active in wind band performance, literature and conducting. He studied brass pedagogy, brass band performance practice and literature with John Kincaid. As a trombonist, he had performed with the Los Angeles Philharmonic during summer concerts at the Hollywood Bowl. He was a bass trombonist with the Colorado Brass Band and a past performer with the Ithaca College Trombone Troupe, which recently completed a CD of newly commissioned works for trombone choir.

With expertise in brass ensembles, band rehearsal techniques, and curriculum/technology applied to music education, he had presented clinics at regional and state MENC conventions. He arranged music for college and school bands and had co-published articles in various regional publications.

The son of David and Stephanie Bazley Swearingen, he was born November 26, 1958 in Colorado Springs, Colorado. He graduated from Colorado Springs' General William J. Palmer High School and received his bachelor's degree from Western State College in Colorado. His Master of Music Education and his Doctor of Music Arts are from the University of Southern California.